One of the earliest buildings in our area was a log cabin built in 1724, eight years before George Washington was born. It was located at the foot of North Eleventh Street on land which is now the Loyd Roland Memorial Park. The cabin was built by Philadelphia fur traders who met Indians each spring as they came to drink the medicinal waters and trade their furs. The building had wooden shutters on the north and east sides. The shutters had holes five inches in diameter, which are thought to have been used to look out for unfriendly Indians who were living in the area at the time. Many arrowheads have been found in the fields surrounding the cabin.

A farmhouse and barn were added later. In modern times, the farm was owned by Clayton Wenger, Sr., who operated a bottled water business which was famous for its spring water. It was known as the Bond Spring Farm.

Clayton Wenger, Jr., sold the farm to the Borough in 1951. The log cabin burned down in the early 1940s, and the Borough dismantled the barn after purchasing the property, but the original farmhouse still stands and is being lived in today.

Early records do not state from whom the original land grants were made in the Borough, or what year, but there are early land grants recorded in Harrisburg from Thomas, John and Richard Penn, all sons of William Penn. There was a grant dated December 7, 1739, to Henry Miler, another dated November 30, 1748, to Mathias Beckley, and another dated June 13, 1749 to William Shearer. The new owners paid the Penns 19 cents an acre.

Vincens and Anna Mayer owned 68 acres and 71 perches on what is believed to be part of these original grants. They built a farmhouse near the intersection of what are today Diamond Street and Tobacco Road.

The following is quoted from a book called The Pennsylvania Citizen, which records William Penn’s instructions about local government. “Whenever a village has a population so large that it needs separate schools, lighted streets, improved sidewalks, etc., it may set up a government of its

own, for the township has no power to grant these things to a village, nor would it be inclined to grant them if it could. A town that has a government of

its own is a borough. To organize itself into a borough, a village must petition the court through a majority of its voters, and give notice thereof in one newspaper of the county for at least thirty days. If the judge approves the petition, the borough is incorporated.”

A petition was prepared for the court in November, 1894, and the grand jury certified the incorporation of Akron as a borough in 1895.

During this period the chief industry was the manufacture of handmade cigars. At one time, more than 50 cigar “factories” were located in Akron. Many of these factories consisted of back rooms in private residences, but several were quite large and employed many people.

Early in the 20th century, the Miller Hess Shoe Company became the dominant factor in the Borough’s economy, a role it maintained until it closed its doors in 1985.

The former Usner House, a landmark from that era, still stands on the southeast corner of the square. In front of the building on South Ninth Street there was a sign marked “LAW” on which all the borough ordinances were posted. Another landmark was Romig’s Hotel, which stood on what is now the parking lot for Weiser’s Market.

The Village Band Hall, a two-story building next to the Usner House, was the borough’s social center. Here the community band practiced, boys and girls played basketball and the community held fairs and carnivals. Early Akron churches held Sunday worship services there until their churches were built.

In the early 1900s, North and South Ninth Streets were rebuilt with large stones, which were laid by hand. A water department was created in 1911, and an electric light company in 1912.In 1939, the state built Route 222, now Route 272, through town on Seventh Street. The route had formerly followed Ninth Street.

Akron residents served their country in all the wars of the 20th Century. Celebrations were held to honor servicemen returning from World Wars I and II. Marine Private Harold “Butter” Myers died in action in the Marshall Islands in February, 1944, and Army PFC Harold R. Deyer died from wounds received on D-Day. Both soldiers were 20 when they died.

About 1946 a full time police department was established. A new water plant and reservoir were built in 1962. Borough council adopted zoning and subdivision ordinances in 1964. In 1969 construction started on a sewerage system, which was completed and put into service the following year. A project was begun in 1972 to rebuild all the streets in the borough. That project was completed 15 years later. The Loyd Roland Memorial Park was also dedicated in 1972. The park would eventually have baseball and soccer fields, lighted tennis courts, a pavilion, a meeting house and a paved bicycle path. In April of 1981, an arsonist set fire to the Borough Hall. A few months before the fire, then borough manager Wilmer Hall had removed and stored in his home decades of Akron memorabilia that had been kept in a closet above the bathroom where the fire was set.

A longstanding drought took the borough to the brink of a water crisis in May of 1981. Fire hose was laid from a hydrant in Ephrata to the borough standpipe and water was brought in from our neighbor’s system. When water began to flow, the standpipe held less than a six-hour supply. The 4,400 feet of fire hose was purchased at a cost of more than $11,000. The water did not need to be pumped, because Ephrata’s Spring Garden Street reservoir is on a level with the stand pipe, and the water flowed through gravity alone. A permanent hookup was installed by the end of the summer, and in 1983 the two boroughs formed a joint water authority. In 1983-84, Main Street was rebuilt from Rothsville Road to Tobacco Road.

After construction was finished, 42 sugar maples were bought and planted along Main Street. In 1985, the Borough celebrated its 90th anniversary with a celebration and the town’s first official fireworks display. With the closing of the Miller Hess Shoe Company in1985, all the factories and mills, as well as the railroad, that had formed the economic base for Akron’s first century were gone. As the town entered its second century in 1995, it found itself in a state of transition, but firmly rooted in the values and in the traditions of neighborliness that had served it so well through its first hundred years.

(Material for this history was generously supplied by Wilmer Hall, a former councilman and borough manager who devoted many years to the service of the Akron community.) (This history is from the 1895-1995 Centennial booklet.) 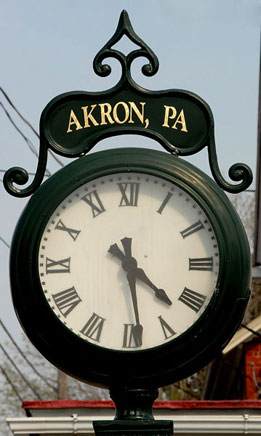